Between Louisville against Kentucky, UConn versus Iowa State, and Virginia taking on Michigan State, the bracket could get wily.

Thursday's Sweet 16 action was sort of predictable. Arizona, Wisconsin and Florida are three really good teams, and Dayton didn't go into a game against an inconsistent Stanford team looking like the underdog. But Friday will be different, and there's a higher probability for upsets to go down.

The Tennessee Volunteers made the First Four concept look like a good one, and a lot of people have them upsetting the No. 2 Michigan Wolverines. Tournament analyst Kenny Smith has made it clear: March Madness is all about matchups. Such is why Stanford and Dayton got so far. The Vols got some favorable matchups against UMass and Mercer, but Michigan is the real deal after it controlled the Texas Longhorns for an entire 40 minutes.

It's pretty much a toss-up. Two well-coached teams led by two of the NCAA's rising stars on the bench (not named Archie Miller) square off. The Iowa State Cyclones lost Georges Niang for the season a few games back, but they still have some firepower with Melvin Ejim and DeAndre Kane. The UConn Huskies will ride guard Shabazz Napier once again, but he needs some help. And fun fact courtesy of the AP's preview: coaches Kevin Ollie and Fred Hoiberg first met on a recruiting trip to Arizona.

A young Kentucky Wildcats squad dropped their rivals earlier in the year, but John Calipari's Wildcats are much improved since. I realize the ol' championship win from a year ago has rightfully earned the Louisville Cardinals respect this season, but some things about Rick Pitino's team worries me too much. Then again, the defense could force turnovers against UK if it reverts back to its youthful self, and Russ Smith could shoot the Cardinals' way to a win.

Another toss-up comes with the lower seed being the Vegas favorite. Virginia's season and its defense have been a fun storyline for former Wazzu coach Tony Bennett, but Michigan State has similar horses to Arizona -- and better shooting. The Spartans might be more on edge after a tough victory against Harvard last week, while the Cavaliers have cruised in big victories against Memphis and Coastal Carolina. 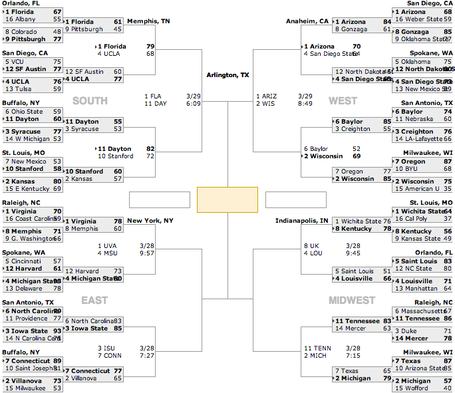