Arizona will lose Nick Johnson and Aaron Gordon, but Kaleb Tarczewski and Rondae Hollis-Jefferson are back.

Nick Johnson will join Aaron Gordon in the 2014 NBA Draft, and the two Arizona Wildcats announced their intentions Tuesday at a press conference that was also used to announce the return of three other UA players. Brandon Ashley, Kaleb Tarczewski and Rondae Hollis-Jefferson return to give Arizona another shot at a deep NCAA Tournament run.

While Gordon's decision was far from a surprise, Johnson's situation is less clear.

Miller said his guard wasn't in "la-la land" and knows he's projected as a second-round draft pick. Johnson doesn't need to look any further than Solomon Hill, who to some wasn't even considered a second-round pick but worked his way through 18 individual team workouts to being selected by the Indiana Pacers in the bottom third of the first round. 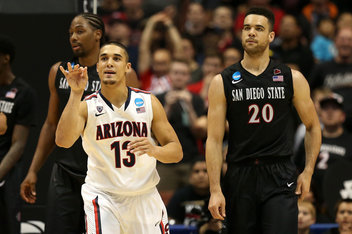 "I've taken the time to think about my decision since the end of the season," Johnson said during his streamed press conference. "The feedback that I got was something I was confident in.

"I just had to make a choice for myself."

Miller admitted that Johnson's evaluations from the NBA Draft Advisory Committee made it hard to see his stock being helped by staying a senior season. As a position-less player who is too small to play shooting guard but not at the NBA level in terms of point guard skills, the label of role-player will keep Johnson's stock from ballooning even with a big senior season.

Here's the summary of DraftExpress' evaluation on Johnson:

Johnson's size and lack of point guard skills play against him, but his athleticism, coupled with his competitive nature and ability to make set shots could inspire some confidence that he can carve out a niche as a role-player, especially on teams that play up-tempo and are looking to add toughness and explosiveness to their backcourt.