With the departures of Aaron Gordon and Nick Johnson becoming official, Dusan Ristic has signed on as a member of the 2014 recruiting class

If Aaron Gordon and Nick Johnson make it official, that puts UA at the scholarship max of 13, making it less awkward when Dusan Ristic signs

Ristic, who measures in at 7-feet and 240 pounds, joins Stanley Johnson, Parker Jackson-Cartwright, Kadeem Allen, and Craig Victor in a well-rounded recruiting class that once again ranks as a top-10 group nationally. 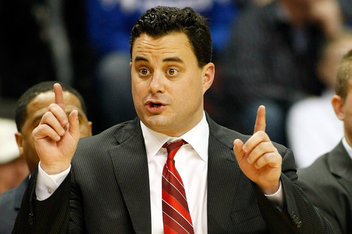 What will Dusan Ristic bring to the Wildcats?

"One of the things that's so exciting about Dusan coming to Arizona is that his skill level starts in the low post, which is unique in today's game," Miller said in a statement through the school. "He has fantastic hands, a high basketball I.Q. and great size, but he also comes to us very well-versed on how to play in the post.

Ristic is considered one of the best international players in his age group. His strength lies in his length, comfort scoring with his back to the basket or shooting midrange jumpers. The main knock, according to DraftExpress, seems to be regarding Ristic's toughness.

Arizona now sits at 13 scholarships and will ride returning starters in T.J. McConnell, Rondae Hollis-Jefferson, Kaleb Tarczewski and Brandon Ashley. Sean Miller said that he doesn't expect any transfers -- even forward Zach Peters seems to be sticking around -- so Ristic wraps up a five-player class that adds depth that this year's team didn't have.

So now the depth chart for the 2014-15 season looks something like this. And yeah, I'm keeping Gabe York in the starting lineup assuming Stanley Johnson is used like Hollis-Jefferson was this season: