Could Danny Ainge and the Boston Celtics be set on taking Arizona basketball forward Aaron Gordon?

Aaron Gordon is expected to go in the 2014 NBA Draft anywhere from fourth overall to 10th. The Boston Celtics are owners of the sixth pick, and rumor has it they are very interested in selecting the Arizona Wildcats forward, according to Chris Mannix of Sports Illustrated.

A trade is possible here, too. Ainge is always on the lookout for a make a blockbuster deal, and with Boston's assets he is more than equipped to do so.

Let's all jump on the 'if' train. Boston is in the mix to land All-Star power forward Kevin Love, and if such a trade goes through it would very likely mean the Celtics will have to hand over their sixth overall selection to the Minnesota Timberwolves. 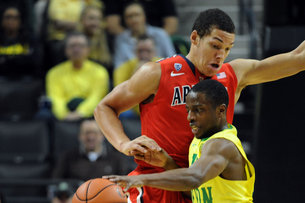 Examining where Aaron Gordon could land

At this point in the draft process, it's also entirely likely Ainge and the Celtics are drumming up rumors to hide their true intentions. They haven't even worked out Gordon to this point, and as Jay King of MassLive.com points out, Celtics general manager Danny Ainge has a recent history of creating smokescreens only to pass up players the team was once rumored to have an eye on.

For many reasons, Gordon and the Celtics make sense. They met at the draft combine and it's clear Boston would like a player who is knowledgeable about the team's history. Gordon even had his own "Kevin Love visits Boston" moment when he attended his sister's Harvard graduation last week -- of course it came with less hoopla.

In Gordon's second draft diary for SLAM, he said he will visit the Los Angeles Lakers -- that's today -- and Orlando Magic. Orlando owns the fourth and 12th picks, and there's a slim chance the Magic could swipe Gordon off the board before the Celtics even have a chance at grabbing him. Same goes for the Utah Jazz and their five pick.

Johnson works out for Raptors

Gordon's teammate, Nick Johnson, has worked out for several NBA teams so far and will be in Phoenix in the coming days. Check out his video interview with Raptors.com.