Ready for the couch fires!

It all started off with an innocent enough comment that isn't exactly ridiculous. 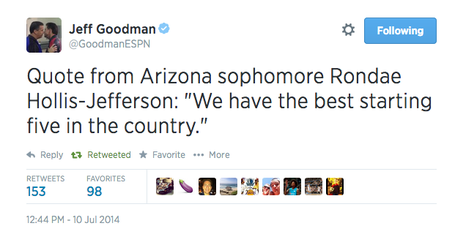 As you might expect, some non-Arizona fan bases are going to be rubbed the wrong way about Rondae Hollis-Jefferson's comment, much like the Syracuse fans did last season whenever someone pointed out that Arizona could be the better team though they weren't ranked No. 1 -- or vice versa.

@GoodmanESPN tell him thanks we all needed a good laugh

@GoodmanESPN @KyleTucker_CJ the Kentucky bench is better than their starting lineup...

@tsnmike @GoodmanESPN Mike, I'm from KY. By state statute, I have to be snarky about other college basketball programs.

Arizona's starting lineup -- if we project it to be T.J. McConnell, Stanley Johnson, Hollis-Jefferson, Brandon Ashley and Kaleb Tarczewski -- has age, experience, versatility and the defensive edge on the Wildcats. That's arguable but not foolish to say.

Kentucky certainly wins the depth argument, if you'll take a quick look at a projected depth chart where a guy like Karl Towns is listed as a member of the third unit (this is copied from Wikipedia but the point remains).

Anyway, something tells me this is only the beginning of a recurring argument between two pretty rabid college basketball fan bases.