... there's assistant coach Luke Walton, a former University of Arizona player and triangle offense expert from winning championships playing for Phil Jackson. The player development coaches are former Suns big man Jarron Collins and Kerr's former Wildcats teammate Bruce Fraser, who was brought on to be a player development coach for the guards.

"We got a nice little Arizona crew, but I think it's more a connection of just smart, cerebral basketball players that see the game the same way," Walton said. "That's kind of what attracts us to each other to build this team."

The connections here are all over the place, but Kerr wasn't doing anyone favors per se. He just went with people he's familiar with.

Walton, who was last with the Los Angeles D-Fenders in the D-league, played the 2002-03 season with Iguodala but is now his coach. He chose to join Kerr despite being rumored to be a candidate to be the head coach or an assistant candidate for Jackson's New York Knicks.

And so, I get to update this crude map of Arizona products in the coaching ranks. 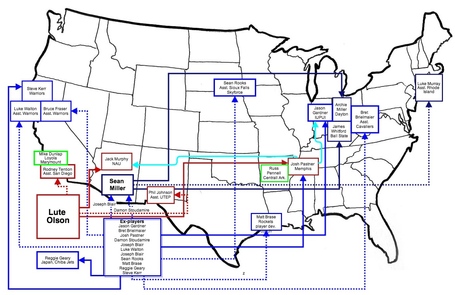 From the last time we checked in, Jay John wasn't retained under the new Cal coaching staff, and Jessie Evans is no longer with Southeast Missouri State as an assistant. The other bit of surprising news is that it appears the Cleveland Cavaliers have retained their assistant staff under new head coach David Blatt -- that means Bret Brielmaier will get to coach up a guy named LeBron James.