Arizona basketball: Rondae Hollis-Jefferson is not the only offensive upgrade

Arizona will rely a bit on Rondae Hollis-Jefferson to improve his shooting, but there is a chance next year's team will be much improved across the board.

Share All sharing options for: Arizona basketball: Rondae Hollis-Jefferson is not the only offensive upgrade

It was so bad last year that Sean Miller couldn't put his five best players on the court at the same time -- no disrespect to Gabe York, who was part of the best five-man unit of 2013-14. A few Arizona Wildcats couldn't shoot last year, which isn't a problem at the individual level until it gets to the paint where two of the players on the court can't score anywhere but at the rim.

A Sports Illustrated article from mid-August laid out just how much Rondae Hollis-Jefferson knows about his biggest flaw. Knowing he's going to be counted upon this coming season, the rising sophomore expects that his jump shot will get better after some retooling this offseason. Brian Hamilton laid it out on SI.com, but here are the raw figures about what the forward is trying to correct:

Hollis-Jefferson shot 49 percent from the floor as a freshman but attempted just 10 three-pointers (making two). He was very good in close proximity to the rim, though, shooting 59.2 percent on 159 "around the basket" shot attempts (excluding post-ups, off which he shot 42.9 percent), according to Synergy Sports Data. But he attempted only 48 jumpers among his 247 field goal attempts and made just 10. That's 20.9 percent efficiency, and he was even worse off the dribble, hitting 18.5 percent (5-of-27). His jump shot produced a total of 22 points all year.

Visually, that looked like this, via Nylon Calculus' shotchart database. 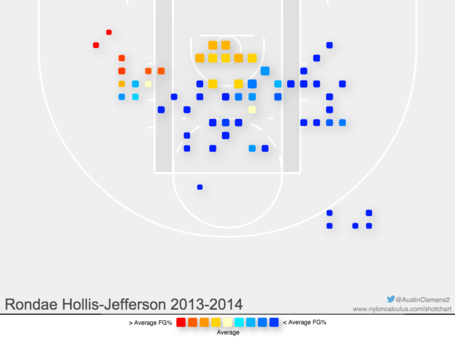 Pair that with Aaron Gordon's ice cold scoring abilities, and it was a problem. A big one. Often times, the Wildcats wouldn't even have a passing lane to dump the ball down into big man Kaleb Tarczewski. It wasn't on T.J. McConnell for not creating an angle or Zeus for not getting open. It was on their teammates, who were standing at the three-point line as their defenders hung around the charging arc.

And why wouldn't Arizona's opponents clog the lane when two players shot charts looked so blue? 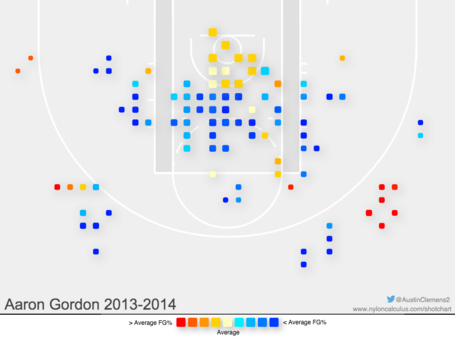 Gordon was a non-factor unless spotting up behind the three-point arc on the wings. The visualization probably doesn't emphasize how few three-point shots Gordon actually took (it was 45 of 382 total shots, or just 11.7 percent).

Point being, the Wildcats struggled to score without spacing. It popped up in the Pac-12 Tournament Championship, when Miller opted to try out a defensive-minded lineup that didn't include York. They fell behind, though one could argue it was more than an offensive issue. But it also happened earlier in the year, in the ASU game soon after Brandon Ashley was injured.

Ashley's return indicates that the Wildcats' offense should have a lot more shooting and a lot more space to work with. While Ashley struggled on the wings, he was elite shooting the three straight away as well as stepping a few feet inside the three-point arc. 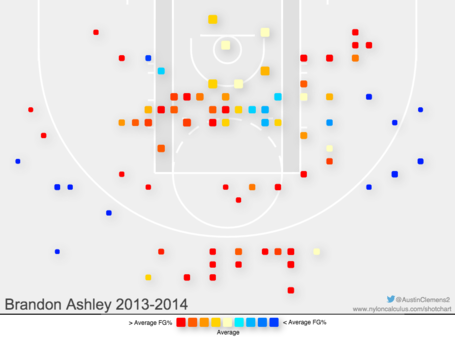 CBS Sports' Jon Rothstein wonders whether Arizona will actually be more versatile and deeper than last year, and toss in the improvements from Hollis-Jefferson, Ashley's return, and Elliott Pitts' push -- he apparently has gained 20 pounds plus was dealing with injury last year -- and there will be even more space for T.J. McConnell to drive and kick, for RHJ to simply drive, and for Kaleb Tarczewski to go to work. And by the way, Zeus' mid-range game showed enough improvement where he might begin pulling shot-blocking centers out of the way with a little gravity of his own.

Arizona thrived in the open court last year with Gordon and Hollis-Jefferson leading the way. But come tournament time they were limited or even liabilities in the halfcourt. In 2014-15, Hollis-Jefferson hopes he's become a threat, but even if it's still a work in progress, the offensive landscape around him will be in a better shape than it was a year ago.