Arizona vs. Gonzaga: Bulldogs use strong start to beat Wildcats 69-62 in Los Angeles

Gonzaga finally got a win against Arizona

Share All sharing options for: Arizona vs. Gonzaga: Bulldogs use strong start to beat Wildcats 69-62 in Los Angeles

The fourth time was the charm.

The Gonzaga Bulldogs snapped a three-game skid against the Arizona Wildcats on Saturday, beating them 69-62 in a wire-to-wire victory at STAPLES Center in Los Angeles.

The Zags took an early double-digit lead and were able to stave off the Wildcats’ late comeback attempt.

“Coming out of the gates, getting down 12, if you look at the rest of the first half, I thought we certainly played a lot better than the first four minutes and I really was pleased by our guys’ effort and resiliency in the second half,” Arizona head coach Sean Miller said after the game. “I thought we fought hard.”

The Bulldogs led 38-26 at halftime, and led by as many as 16 points in the second half, but the Wildcats made it a single-digit game down the stretch.

Arizona cut it to 59-50 after Lauri Markkanen banked in a jumper from the elbow, then Rawle Alkins made it 59-52 with a floater off the glass with just over four minutes left.

Two free throws by Markkanen later made it 60-54 with 3:42 left, but Nigel Williams-Goss scored over Markkanen to push the Zags’ lead back to 62-54.

It became a free throw shooting contest down the stretch, and Keanu Pinder hit two to make it 63-56 with 2:11 left.

Williams-Goss responded with a dagger in the lane to make it 65-58 with 1:11 left, allowing the Zags to escape with the victory.

Przemek Karnowski scored a game-high 18 points, while Josh Perkins added 16 points and Williams-Goss and Jordan Mathews had 10 a piece. 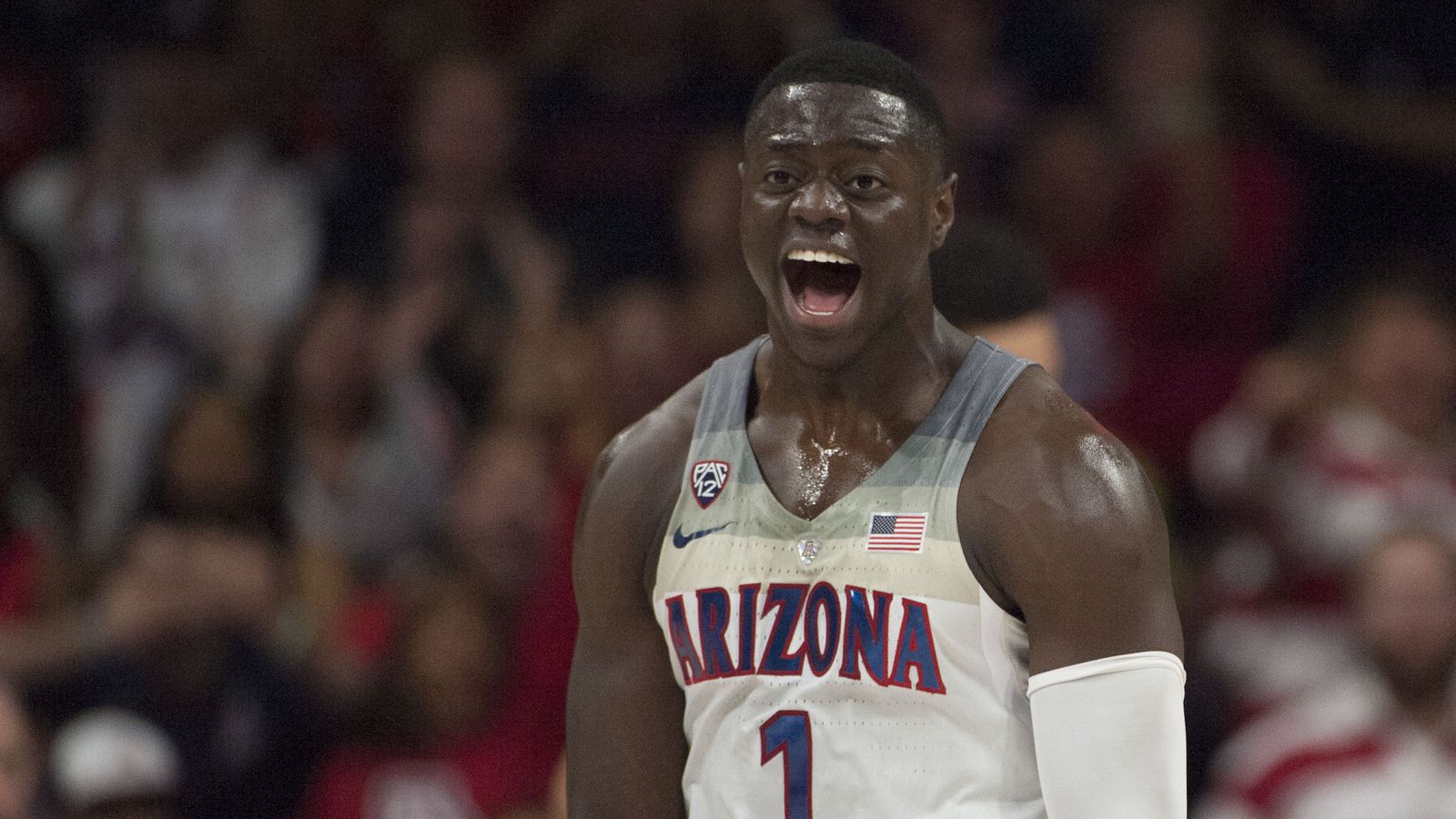 Rawle Alkins stands out as Wildcats fall to Gonzaga

The freshman still has a few things to work on though

Alkins led the Wildcats with 16 points on 15 shots (and seven rebounds), and Markkanen had 14 points and eight rebounds.

“These two guys, I don’t know where we would be without the both of them,” Miller said of Alkins and Markkanen. “Only eight games into their college careers, they’re two of our top three leading scorers....they’re only going to get better and this experience will only make them better.”

Here is the full box score along with a few takeaways from the game:

Arizona’s defense was non-existent to start as Gonzaga made its first five shots and jumped out to a 17-5 lead. There were a number of freshman mistakes. Kobi Simmons bit on a shot fake from Jordan Mathews (which turned into a 3), then turned the ball over on the next possession, which led to an open 3 for Nigel Williams-Goss after Rawle Alkins lost him in transition.

The Bulldogs were getting open look after open look and hit five 3-pointers in the first eight minutes, ultimately giving them a 23-9 lead near the midway point of the first half.

When the Zags weren’t shooting 3s, Przemek Karnowski was pushing aside the Wildcats’ post defenders for easy looks in the paint. He had eight first-half points and the Wildcats had no answer for him.

Markkanen shot just 1-7 from the field in the first half, and it was not because he was missing open shots. The Zags were blanketing the 7-footer. Markkanen got his shot blocked three different times in the first half. As soon as he caught the ball, at least one or two Bulldogs were there to challenge his shot.

Markkanen’s game clearly suffered because of Parker Jackson-Cartwright’s absence. Arizona’s offense was uncreative and mostly relied on the guards trying to beat their man off the dribble.

The Finnish big man did pick things up in the second half, though, as the Wildcats were able to get him the ball in spots where he could take it to the rim or create a shot for himself.

Still, he finished with 14 points on 14 shots, which was his least efficient performance of the season.

It is not a shock that Arizona’s offense was stagnant without its assist-leader. The Wildcats had eight turnovers to just two assists in the first half and, as mentioned earlier, most of their offense was generated by a guard attacking off the dribble and trying to force a shot at the rim.

The ball often got knocked away or they had to settle for tough shots over defenders. The Wildcats also had trouble maneuvering around Gonzaga’s zone (shocker!).

Kadeem Allen, Jackson-Cartwright’s replacement, had five turnovers to just three assists, while Simmons had two turnovers to one assist.

Part of the reason Arizona was able to get back into the game was because it only had four turnovers in the second half.

This game was similar to the season-opener for Dusan Ristic. When he caught the ball on the low block, he was slow to pick up the defense, leaving him in a crowd of defenders, and he had a hard time getting decent looks.

On the other side of the floor, Karnowski was able to move Ristic with ease to get favorable post position.

And with the way the Zags were shooting from 3, Miller opted not to double Karnowski and it burned the ‘Cats.

Ristic’s line of 12 points (4-8 shooting) and seven rebounds looks much better than what the eye test would say about his performance.

Gonzaga shot 6-13 from 3 in the first half, and cooled down considerably in the second half, but it did not matter as Arizona did not make its first 3-pointer until Alkins sank one with seven minutes left in the game.

The Wildcats only took three 3s in the first half, mainly because they couldn’t generate good looks.

They finished 1-8 from behind the arc, while Gonzaga finished 7-21. Needless to say that in modern basketball, it is tough to win games when you’re only making one 3-pointer.

— Kadeem Allen was in foul trouble for most of the game, but played through it, tallying 35 minutes before finally fouling out in the final minute.

— Despite only having seven scholarship players available, Arizona did not use any of its walk-ons until Allen fouled out, primarily because the Wildcats’ seven-man rotation did a good enough job staying out of foul trouble.

— Allonzo Trier traveled with the team to Los Angeles, but he missed his eighth game in a row due to unspecified reasons. There is still no timetable for his return.

— Parker Jackson-Cartwright missed the game due to a high-ankle sprain. He is expected to be out for an extended period of time.

The Wildcats return to action Tuesday when they host UC Irvine. Tip-off is set for 8 p.m. MST and the game will be televised on the Pac-12 Network.