Arizona football: What bye week tinkering are you looking for?

Avinash Kunnath of Pacific Takes asks us what Arizona must change as it prepares for USC during a bye week.

Share All sharing options for: Arizona football: What bye week tinkering are you looking for?

What will you look for Arizona to do during the bye week to improve as a team?

Kevin Zimmerman: I don't think it's fair to ask for more from the defense or the run game. I think the coaches will need to start drawing up big-strike plays each game that they'll set up throughout and then roll with at the right moment. Getting big plays will probably involve throwing the ball, which is scary but the reality. Also, the Wildcats might want to make sure punter Drew Riggleman is ready to go. By the way, it's weird we're talking about Arizona this season as a team that will need to emphasize ball control. 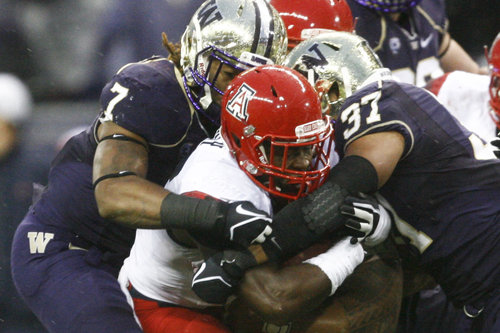 What went wrong for Arizona against Washington?

Jason Bartel: I don't know if USC changing coaches helps or hurts the Wildcats heading into this week.  Now there's no tape with Ed Orgeron at the helm, so what exactly do we expect from the Trojans?  But working on special teams would be cool.  The punting game stinks.  I don't know that I've seen a halfway decent kicker or punter here since Nick Folk.  And forcing receivers to run their routes in bounds.  I think a lot of people didn't notice that because they were focused on Denker's decisions, but there were so many times that the receivers were running their routes out of bounds.  What good does that do anyone?  Sure, Denker's not the best quarterback in the world, but the receivers are really bad at running exact route patterns and getting free from defenders.  I hope the coaches lay into the receiving corps this week.

Adam Butler: I believe the 'Cats could work on putting Denker in position to be successful. They tried to to that last week and it clearly didn't work out too well. What's more, they could probably work to tighten up that kicking game.

Arizona vs. USC: Wildcats face Ed Orgeron and his Trojans