Heisman trophy odds: Ka'Deem Carey is Doak Walker finalist, but should he be more?

Is Ka'Deem Carey a darkhorse in the Heisman conversation?

Share All sharing options for: Heisman trophy odds: Ka'Deem Carey is Doak Walker finalist, but should he be more?

At the beginning of the football season, Ka'Deem Carey found himself on a list of Heisman Trophy candidates. Bovada.lv called him as a 50/1 favorite, or hardly a favorite at all. Since the season began, he's fallen off. Carey isn't on the shortlist as of Week 13 despite seemingly doing everything but, ironically, hurt his Heisman odds.

But FOX's Mike Pereira threw Carey's name out there as a contender. He might have a solid argument.

Among the other players under consideration are: 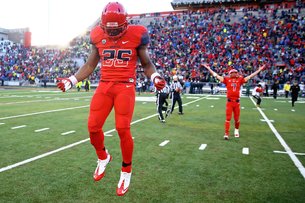 Since 2000, only Mark Ingram of Alabama won as a running back in 2009, and the rest were quarterbacks. But that could swing in Carey and #TeamKaDeem's favor this season. Winston is in the middle of a legal investigation. Miller may have missed a few too many games with injury to be solidly in the running. McCarron has won, but he'll deal with the thing that's kept him out of this race in the past -- he's playing for a team not necessarily reliant upon him and one with talent at every position. Carr and Lynch don't play against the Big Boys every week.

So that brings us to the only other running back in the conversation, Williams. On Monday, Carey, Washington's Bishop Sankey and Williams were named a finalists for the Doak Walker Award given to the nation's best running back. If we are to pin those three up against one another for the Doak, why not consider it regarding the Heisman race as well?

Williams is a talented player whose production is far and away better than Carey's but against less talent in the iffy ACC. You could also pull the "Boston College's offensive line is not as good as Arizona's" card, but for the sake of argument, here is how the numbers break down.

Of Williams' 2,073 total yards, 897 have come in the last three games as he's made a push into the conversation. The opponents, New Mexico State, North Carolina State and Maryland, are a combined 10-21. Against Clemson, the best opponent Boston College has played, Williams rushed 70 yards and with a 2.9 average. We could go on with this and Bruce Feldman of CBS Sports did.

Thing is, as amazing as Williams has been, I'm not sure he's been the most impressive running back in the country. Arizona's Ka'Deem Carey trampled Nick Aliotti's Oregon defense Saturday, carrying the ball a school-record 48 times for 206 yards. It was his 14th consecutive 100-yard-plus rushing game. Carey has been great against every team he's faced. (You can't say the same for Williams, who while excellent against FSU, managed just 108 yards on 41 carries combined in two losses to USC and Clemson.)

Carey has 14-straight games of rushing at least 119 yards. Against Pac-12 squad USC, Williams could only muster 2.2 yards per carry and 38 total. By comparison, Carey put up 138 yards on the Trojans on 6.6 yards per carry, the second-best effort in that regard after putting up 10.7 yards per carry against UNLV in his return from suspension.

That suspension might be the only thing holding #TeamKaDeem back. Carey's offseason domestic violence incident didn't result in charges, but it could hurt the running back's Heisman candidacy if it comes to that.

But after falling out of the conversation, Carey's ridiculous performance against Oregon in Arizona's 42-16 victory on Saturday brought him back to the Heisman table. USA Today's Paul Myerberg ranks Carey sixth in the Heisman race.

Like a toy, Arizona just winds Carey up and lets him go to work - usually to the tune of 150 yards and a touchdown. He was at his All-American best Saturday, rushing for 206 yards and four touchdowns in the Wildcats' 42-16 win against Oregon. That sort of big-game performance - if totally par for the course for Carey - lifts the junior into the thick of the Heisman race.

In the end, winning the Heisman is a longshot. If Arizona and its fans want something to gripe about, it's fair to wonder if Carey deserves an invite to the Heisman ceremony, especially if Williams gets that RSVP in the mail and Tucson's favorite son doesn't.