Checking out some UA and BC alums in the NFL, because why not?

Share All sharing options for: Arizona vs. Boston College, Advocare V100 Bowl: Former Wildcats and Eagles in the NFL

Mostly this was brought on by the realization that Matt Ryan went to Boston College, and, well, Nick Foles is having a better year.

And, just a hunch, Ka'Deem Carey and Andre Williams will be playing in the league sometime in the near future.

So, how are those Cats and Eagles doing in the NFL?

Hasselbeck sits on the bench behind some dude named Andrew Luck (Pac-12 pride! WHAT!)

For more Boston College info, head over to BC Interruption

Advantage Larsen! He has exactly zero carries, but does have a kickoff return for 17 yards! In his illustrious career, he's got 17 carries for 62 yards, and 14 receptions for 127 yards and a TD.

No brainer, another Wildcat victory. This Pantale guy has no stats ever.

This is definitely advantage BC. There are some studs on this list.

This one was not so obvious to me, so let's dive into some stats from this season.

Mitchell has picked up 45 tackles and 1.5 sacks for the horrible Texans.

I think Kiwanuka just edges out Earl Mitchell in this one. The fumbles forced, plus he has three pass deflections. So Boston College has been better in the trenches than Arizona as of late.

Briggs and Reed have a total of five sacks to go with their 116 tackles.

The BC guys have just two sacks (both by Kuechly), but the Panthers LB also has 146 tackles by himself and four interceptions.

Arizona's got more depth (two to one), but advantage Kuechly. Dude's a beast.

Cason all of the sudden got some playing time thanks to the injury to Honey Badger, and promptly picked two passes off in the Titans game, including a pick-six, and one in OT to give the Cards a W.

Catching up with Antoine Cason 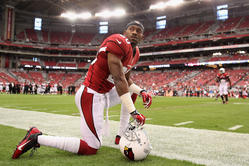 Talked with Antoine Cason after the Arizona/Oregon game

Trevin Wade has played one game for New Orleans, and is currently inactive. Golden has two fumbles forced.

Blackmon has one pick, two fumbles forced and a fumble recovered.

I think Cason somehow wins this one for Arizona based solely on one game. He does have two fumbles recovered this year though too.

Imagine the wagers going on in the special teams meeting room in the Meadowlands leading up to this game.

So this is not plainly obvious. Time to dive in deeper!

So, in closing, here are the results:

In the battle of something that doesn't matter at all and is somewhat arbitrary, Arizona wins!