Ka'Deem Carey and Andre Williams battle it out in the AdvoCare V100 Bowl game in Shreveport.

Ka'Deem Carey went out on top in what might be his final game in Tucson. The All-American running back helped the Wildcats stomp the then-No. 5 Oregon Ducks, but his final game with Arizona should be a doozy. Motivation will run strongly through Carey's veins, but it's why that's the fun part heading into Tuesday's matchup.

Boston College is supplying all the motivation, if not unintentionally. Eagles running back Andre Williams led the nation in rushing at 175.2 yards per game, 19.2 more than Arizona's star. But the accolades kept rolling in for Williams. Carey, meanwhile, was snubbed quite a bit.

A shortlist for you to review:

We're guessing Carey's teammates realize outdoing Williams will be the icing on the cake. He does too, even if he wont' acknowledge it. 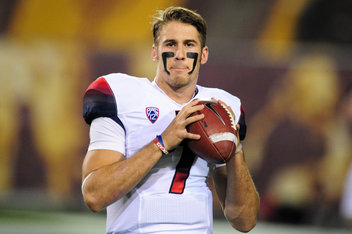 Easily, the offensive and defensive lines will have the underlying roles behind Ka'Deem Carey and Andre Williams. While the two backs can take 40 carries each, the separation between the two offenses -- sans turnovers -- comes down to the passing attacks. These are two very different quarterbacks.

Chase Rettig doesn't have the legs of B.J. Denker, but the rare times he does throw -- BC has the 113th ranked passing offense at 150.5 yards per game -- could be a problem. The Wildcats' defensive backs Jonathan McKnight and Shaq Richardson have been known to jump routes, but the play-action the Eagles use could end with big plays.

On the other side, Denker can keep Boston College on its heels with the zone-option. But will Oregon B.J. Denker show up, or ASU B.J. Denker?

Andre Williams: He led the nation in rushing but did have some dips in consistency. It's hard to discount his overall resume in 2013 (2,102 yards on 6.4 yards per carry), but the bigger issue is how well he does coming off a rough outing against Syracuse where he had nine carries for 29 yards -- 26 came on one play -- and left early because of injury.

Alex Amidon: The wideout had 895 yards to account for nearly half of the Eagles' 1,806 passing yards on the season. Let's just say that when quarterback Chase Rettig makes plays, it's likely going to be to Amidon.

Kasim Edebali: The end had 15 tackles for loss, 9.5 sacks and three forced fumbles on the year.

What else to watch Tuesday