A travel guide by someone who has never been to Shreveport but one who wants to help you decided whether you'll attend the 2013 AdvoCare V100 Bowl.

Don't lie. In the past 24 hours since you heard the Arizona Wildcats would play Boston College in the AdvoCare V100 Bowl, you wondered whether you should go. First, you had to find out that the bowl game is in Shreveport, Louisiana, to which you immediately thought, "More like LEAVEPORT."

Then, if money was of no concern, you probably wondered how in the hell to get there (fly through Dallas, probably).

If for some reason you're still interested in somehow getting there, then you'll be glad to know Shreveport seems like a fun place if you're not put off by cajun food, gambling and drinking. If you can't have fun with that, you may stop reading now.

They have gambling and drinking

Shreveport sits to the west of the Red River and across from Bossier, La., where we hope they actually aren't bossier (ha.ha.). Basically, from what I can tell, the most bar-laden sections of the area are near the river. (Click here for a list of bars via Google search). 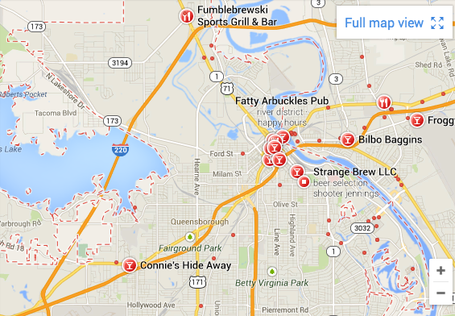 The tourism website also has a shortlist of casino boats. There is probably drinking and gambling on these casino boats.

You had us at "Las Vegas-style."

A popular word among America's youth originated there

The word "ratchet" apparently caught on in Shreveport. You probably won't know what this means unless you listen to contemporary hip hop music.

Like Tucson, there are logistical issues with sidewalks and streets

This Hipster Shreveport blog has the most interesting information regarding Shreveport. An excerpt from author Hank Legan:

Among any group of Shreveport 20-somethings, you aren't likely to find a person speaking highly of Shreveport. In fact, you've almost certainly heard it called "Shit-port," the most widely used of many derogatory nicknames. It's unfortunate, because there actually are a number of reasons to not just enjoy living here but to actually take pride.

Legan created a formula to rate poor street conditions and then started an NCAA tournament-style bracket to determine which street is truly the worst. Here's the bracket. He also breaks down an intersection in Shreveport and notes that there are opponents of sidewalks.

Unfortunately, selling Shreveport becomes hard when Legan writes a review of his favorite bar and then must follow that up a month later with a post about the place closing.

Be wary of ... alligators and gang fights