Boston College running back Andre Williams made the six-man finalist cut, but so did Auburn running back Tre Mason.

Arizona football running back Ka'Deem Carey was left off the list of six Heisman Trophy finalists, and that much isn't too much of a surprise. It's a convoluted picture, and that supposedly is why six players -- the most since 1994 -- were invited.

Four of the players were quarterbacks. But two, Boston College's Andre Williams and Auburn's Tre Mason, are running backs. And that's got to make you wonder where Carey fits in. 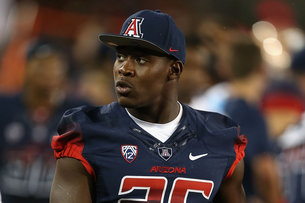 A look at the Ka'Deem Carey and Andre Williams comparison

Mason thrust himself in the conversation with a late run by Auburn to make the national title game. A 304-yard performance on 46 carries in the SEC title game probably sealed the deal, but would Mason even be sniffing this discussion if two extremely lucky plays in the last month hadn't gone in the Tigers' favor?

After all, Mason didn't break the 100-yard mark until Aurburn's fourth game of the season, and he started off splitting carries with teammate Cameron Artis-Payne. Mason finished with five more touchdowns than Carey and a higher per carry average, yet he compiled nearly 100 yards less than Arizona's go-to guy, and needed two more games to get that close.

So does the Heisman committee like the individual talent or the guys playing for championships? Williams is one and Mason is the other.

For what it's worth, ESPN's Heisman pundits ranked Carey fourth behind FSU quarterback Jameis Winston, Williams and Mason. In their minds, it didn't make sense to give the nod to Northern Illinois quarterback Jordan Lynch, whose team was 12-1 while playing a perfect MAC schedule. And it's also a wonder why Texas A&Ms Johnny Manziel was on the list of six finalists having led the Aggies to a 8-4 record. The ESPN crew even ranked Carey ahead of Alabama quarterback A.J. McCarren.

A few weeks ago, we tried to pry apart the answers to find out whether Carey should be in the conversation considering he stacks up so well with Williams, who is the nation's leading rusher. The similarities are all there -- two very good players made so-so teams good enough to meet in a lower-tier bowl game, the AdvoCare V100 Bowl.

It'd have been nice to see Carey invited to the Heisman ceremony, but there's no point in wondering "What-if." What matters is what is relevant regarding this picture.

The AdvoCare V100 Bowl suddenly gets a sidestory.

The Heisman won't be announced until Dec. 14, but the invite to the Boston College star is already a tip of the cap in his direction -- and motivation for Carey. Additionally, the Doak Walker Award given to the nation's best running back will be presented to the winner on Dec. 12. Carey, Williams and Washington's Bishop Sankey are in the conversation.

If that's the case, come the New Year's Eve bowl game in Shreveport, La., it could be Carey having the most to prove.