Matt Scott slipped completely out of the 2013 NFL Draft as 12 quarterbacks were selected.

After all that, Matt Scott is still on the board. The former Arizona Wildcats quarterback went undrafted in seven rounds of the 2013 NFL Draft and now can sign with a team as an undrafted free agent.

Heading into the draft, which began on Thursday, Scott looked like he was about to pull a Chris Henry and leap up the draft boards as he blew up pro day and impressed during workouts. Instead, the hype that had some calling him the quarterback with the most untapped talent saw him fall below where he probably would've gone without said hype.

The ESPN crew ended hitting on Scott before the Mr. Irrelevant pick at the 254th overall selection.

"I think it's the combination of his size, and it's a true spread offense," Bill Polian said of Scott and his time at Arizona. "And one year (starting), people get scared of it."

So where could Scott end up?

Many had Scott being selected by the Jacksonville Jaguars because of his familiarity with quarterbacks coach Frank Scelfo, who coached Scott in the same position at Arizona. That might be his most-likely landing spot now.

David Caldwell said look for the team to add a quarterback in college free agency.#Jaguars

Others saw him fitting in Philadelphia, where former Oregon coach Chip Kelly is implementing his spread offense, or in San Francisco, where Colin Kaepernick shined as a dynamic pass-first, run-second quarterback. Seattle, behind last season's rookie upstart Russell Wilson, was another possibility.

Some even predicted Scott would stay in-state as the Arizona Cardinals seek help behind starting quarterbackCarson Palmer. In the sixth round, Arizona chose Ryan Swope, a Texas A&M receiver who tore up the draft combine like Scott -- but also dealt with concussion issues, a proposed key reason that he fell.

The Arizona Daily Star's Greg Hansen proposed that as the most valid reasoning for Scott's fall, one that wouldn't be evaluated by any draftniks but rather teams with their in-depth scouting.

And with that, there was little doubt Scott didn't go where he expected. 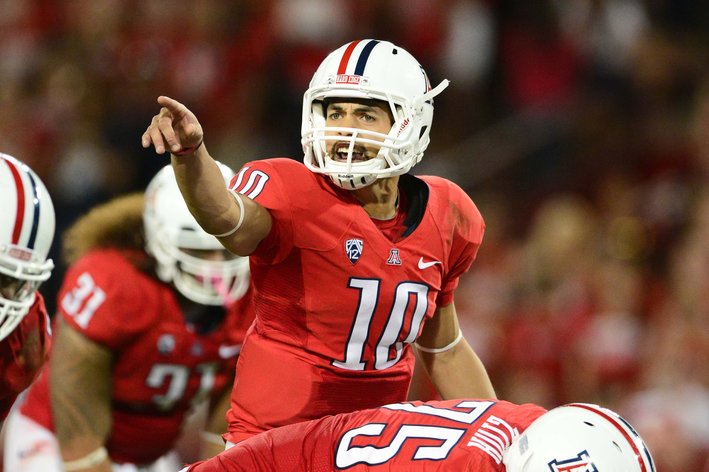 On the issue of Matt Scott's possible concussion

As a refresher, Scott battled concussion issues throughout the season. He denied it was an issue in a controversial in a gutty performance that led the Wildcats against USC. The next week in a dominating game by the UCLA Bruins, Scott took a hit that knocked him out of the game in much more obvious fashion.

Only eight quarterbacks were taken in the first six rounds of the 2013 draft, and it was fitting because Scott was considered to be in the bottom of the top-10 best available quarterbacks taken. But in the seventh round, Southern Utah's Brad Sorensen, Miami-Ohio's Zac Dysert, South Florida's B.J. Daniels, Duke's Sean Renfree were selected.

Scott threw for 3,620 yards, 27 touchdowns and 14 interceptions during his senior season -- not to mention 506 rushing yards. Arizona's quarterback finished sixth in the nation with 4,126 total yards.