Rich Rodriguez is making it a trend to take in big-name transfers, and that's OK so long as we borrow a lesson from 'Breaking Bad.'

This piece includes a "Breaking Bad" spoiler. The point? While taking in transfers is a great way to improve the talent well off the bat, the Wildcats must be wary about taking on Cayleb Jones and his past.

Another transfer and another nice addition for the Arizona Wildcats. Former Texas Longhorns receiver Cayleb Jones announced his decision to attend Arizona on Tuesday, and it's not hard to find similarities to former Wildcats wideout Dan Buckner.

Jones was arrested and charged with second-degree aggravated assault in March after allegedly punching a Texas tennis player in the jaw. The charge was reduced and dismissed in April, but Jones decided to transfer rather than stick with the Longhorns even though he was expected to challenge for starting minutes. 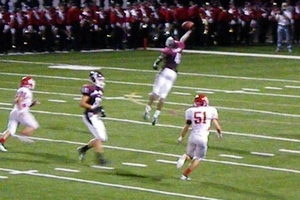 Like Buckner, Jones came out of high school as an ESPN top-150 recruit. Jones, a 6-foot-3, 200-pound wideout from Austin High School, attended Texas and played for Mack Brown before finding himself in legal trouble. Brown still has his mad lib of a transfer press statement from Buckner's days. First, the statement regarding Buckner's transfer:

"We've talked to Dan and his family about the recent situation and they've assured us that they think he hasn't done anything wrong and they are confident it will be cleaned up in the legal process," Brown said. "During our discussion with Dan and his family, we all decided that the best thing for him would be to transfer to another school and get a fresh start.

"We appreciate everything that Dan has done for Texas and our football program and we wish him the best in the future."

"We've talked to the Jones family and realize this was a very difficult decision," Brown said in a statement. "Cayleb is looking for a fresh start, and we understand that and are appreciative of everything he did for Texas. We will support him as he moves forward and wish him the best of luck in the future."

The only difference? Brown adds that even though he believes the situation would be "cleaned up," he thought it'd be a good thing for Buckner to transfer.

Arizona has made it a habit of accepting players with past issues. So far it hasn't come back to burn the Wildcats. Shaquille Richardson was another transfer who didn't last at his previous school, in that case UCLA. Rich Rodriguez is just happy to improve the talent level of his roster, and if it comes at a reasonable risk, so be it. Buckner didn't cause much trouble in Tucson and Richardson has been a solid enough citizen off the field.

Offensive lineman Jeff Worthy, a former Boise State Bronco, is part of the next recruiting class after having been dismissed from Chris Petersen's squad. They join big-name transfers in former Notre Dame receiver Davonte' Neal and quarterback Connor Brewer, yet another Texas product to leave Austin for Tucson. Jones' father told ESPN that Brewer had a great deal of influence on the decision to choose Arizona.

"I think that's a good thing just starting off from a personal side and having a relationship. They built a good relationship before they joined the University of Texas," Robert Jones said. "They've known each other for quite some time. Who knows, it could be Connor throwing to Cayleb in the future. I don't think Connor was the deciding factor, it was more about what's his opportunity and his chances of playing."

Is the playing dice with transfers a good thing?

Immediately it helps. Developmentally, it's not the best considering they won't have full tenures in navy and cardinal. But such is the rebuilding process. RichRod has gotten a pretty solid handle on the recruiting trail, but until the Wildcats start challenging for division titles -- if not conference ones -- the four- and five-star prospects will be out of reach.

Maybe it's easy to praise a team like Arizona picking up the broken projects of more football-savvy schools. College hoops has shown UA fans it's acceptable and a sneaky way to get immediate-impact players.

But to steal from the most recent "Breaking Bad" episode, if Arizona doesn't know the type of players it's recruiting:

"If that's true - if you don't know who I am - then maybe your best course would be to tread lightly."