The Arizona football team released a semblance of a depth chart on Tuesday.

Rich Rodriguez released his Week 1 depth chart Monday as Arizona readies for Northern Arizona, and there were a number of considerable surprises to go around. None of that, however, had anything to do with the quarterback situation, which is still between B.J. Denker, Jesse Scroggins and Javelle Allen. 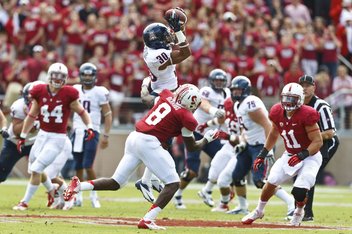 How will the Wildcats make up for the loss of Austin Hill?

Who will one of those three be throwing it to? Terrence Miller is unsurprisingly listed as a tight end and slot receiver, while former walk-on Johnny Jackson is battling the other inside spot out with freshman Nate Phillips, who has been one of the camp surprises. Phillips also is listed as the first-team punt return and kick return man, with Jackson backing him up for both.

Two other freshman, Clive Georges and Samajie Grant, are fighting for one outside spot, and junior Garic Wharton appears to have the opposite position on lockdown.

Oh yeah, and that Ka'Deem Carey fellow still has a grasp of the starting running back position.

Defensively, an experienced defensive line is headed by a more beefy Sione Tuihalamaka (269 pounds), who this year will play end. Nose tackle Tevin Hood, a transfer two years ago who comes in at 302 pounds, and a 6-foot-4, 261 pound Reggie Gilbert fill out what last year was a more undersized defensive line made up of the same players. Three years removed from being a freshman All-American candidate, Justin Washington is listed as the third-string end.

Jake Fischer and Marquis Flowers remain as the linebackers but there's a battle between sophomore Keoni Bush-Loo and freshman Scooby Wright for the strongside starting linebacker.

Tra'Mayne Bondurant and Jared Tevis return at the spur and bandit positions. Jourdon Grandon is at free safety and Jonathan McKnight is at one corner spot. Shaquille Richardson and Derrick Rainey continue a perpetual battle for the final cornerback position.

And on special teams, Jake Smith finds himself in an exciting battle with Casey Skowron for the kickoff and field goal spots. Drew Riggleman has beaten out Smith for the punting duties.

Overall, RichRod is tossing some freshman into the flames. There are some veterans who were once significant contributors that aren't on the two- and three-deep depth chart, a sign that there are 1) more options and 2) some promising recruiting going on.