Lane Kiffin firing gives Arizona one tough out against USC

It was promising to take a peek at Arizona football's schedule prior to the season, but another wrench has been thrown into the Wildcats' plans.

Share All sharing options for: Lane Kiffin firing gives Arizona one tough out against USC

It all along looked so easy. The Arizona Wildcats' 2013 football schedule seemed to fit perfectly trim for a team that would be filling major holes. Comparatively to the past, the schedule made it possible for a relatively bad season to net UA a bowl bid.

Last season, the Wildcats played four ranked teams (No. 18 Oklahoma State, No. 3 Oregon, No. 18 Oregon State and No. 18 Stanford) in the span of a month. In 2011, it was three top-10 teams in a row (No. 9 Oklahoma State, No. 6 Stanford and No. 10 Oregon) followed by USC and Oregon State -- the run ended with Mike Stoops' firing. The beginning of the end of Stoops came at the tail end of the previous season, where Arizona played No. 13 Stanford, USC and No. 1 Oregon before losing to Arizona State and then No. 14 Oklahoma State in the Alamo Bowl.

So excuse the Wildcats for having a pretty schedule for once.

The rise and fall 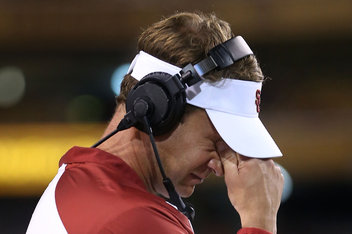 Lane Kiffin's firing at USC just made it a lot harder.

Arizona's nonconference schedule has been heavily criticized, and that's fair considering how unprepared some facets looked against Washington. Then again, the defense held a versatile offensive team to 31 points and 409 yards, rain or not. That's better than Boise State, Illinois or Idaho State -- UW's first three opponents -- could do. Even considering the win against Arizona, the Huskies are still averaging 574 yards per game.

The heart of the schedule this year is the lightest portion with games against Utah, Washington State and Cal. But to get there, the Wildcats will have two weeks to lick their wounds from the Washington game and prepare for a USC squad that got embarrassed by ASU. And the Trojans likewise have a bye week heading into the game, which should allow receiver Marqise Lee to recover from a knee injury.

Interim coach Ed Orgeron doesn't need to do much in terms of motivating his team after Kiffin's firing. Even worse news for the Wildcats is that the Trojans' 62-41 loss in Tempe might have been an anomaly. Beforehand, a good amount of the media was praising the one clearly-positive part of USC's attack -- the defense. That's because the defense, with its small stable of elite athletes, was pretty darn good. Behind the improvements is defensive coordinator Clancy Pendergast, a 1990 University of Arizona graduate with a bachelor's degree in agriculture, of all things. You don't think he'll take pleasuring in beating his alma mater?

There's a good bet the Trojans will be stewing over giving up so many points to ASU over the next week-plus. And there's a good bit of game film from Saturday that'll look mighty familiar to Arizona's attack, too.

It'll be up to the Wildcats' surprising defense to show up again on the road. It's possible, but you know how it goes for teams playing an opponent that just fired its head coach.