Ka'Deem Carey made a statement on his first play and B.J. Denker's job security waned in a big win where the defense rose the occasion.

A punting unit without a punter. A penalty after a meaningless touchdown and then a missed extra point. Disregarding the nation's leading rusher of last year and allowing a 58-yard touchdown pass on his first touch.

These are the thing the UNLV Rebels did in Las Vegas during a 58-13 loss to the Arizona Wildcats on Saturday night. In what by no means was a great game by Rich Rodriguez's squad, but the Rebels continuously turned in mistakes most costly than the Wildcats' own. Defensively, Arizona again put in a game that bodes well for the future, save for a blown coverage on a 69-yard touchdown jaunt by UNLV receiver Devante Davis after UA already led 17-0. 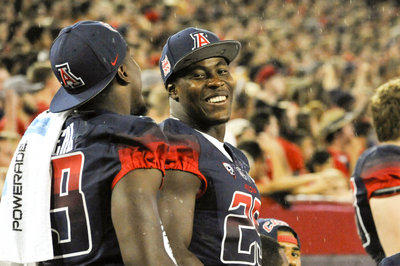 Jake Smith hit a field goal for Arizona to start off the scoring, B.J. Denker dashed for 35 and then four yards for two more touchdowns, and Ka'Deem Carey finally saw the field in the second quarter and took a 58-yard run for a touchdown on his first carry of the year. He finished with 171 yards on 16 carries and two touchdowns against a helpless looking UNLV squad.

Then, the defense tidied itself up after the first-quarter miscue. Jake Fischer and Tra'Mayne Bondurant took interceptions to the house -- of 49 and 52 yards, respectively -- in the final seven minutes of the first half for a 45-6 halftime lead -- and that was that.

Smith got some reps in the kicking game to add two more field goals in the second half, and from there the Wildcats only allowed a breakaway, 79-yard run by running back Shaquille Murray-Lawrence.

Raised concerns about the QB situation

Part of it was the offensive line having lapses. Sacks were given up as B.J. Denker's pocket collapsed, but there are growing concerns Denker might be in trouble once Pac-12 pass rushes head his way. His 8-of-20 passing for 81 yards weren't much better than UNLV starting quarterback Nick Sherry's day of 5-for-21 passing, 95 yards, a touchdown and two interceptions.

Yet Denker didn't make any mistakes through the air and looked solid until two plays in the second half, including a fumble, that drew the ire of Rodriguez.

The gist is this: RichRod doesn't trust whatever is behind Denker. The quarterback's 17 rushes for 63 yards make him a legitimate rushing threat. He knows the offense better than anyone else and to the eye has fine game management skills. That said, he left the door open.

But until a quarterback shines in practice that isn't named B.J. Denker, he'll maintain a grip on the starting spot.

It's hard to get extremely excited about Arizona's defense considering it's played two teams that couldn't do much through the air. Still, it's been impressive.

The secondary had room for error, but for the most part it's played with a sound, mechanical approach. The linebacking crew has been especially impressive even though last year's New Mexico Bowl hero, Marquis Flowers, has been relatively quiet through two wins.

Jake Fischer and Tra'Mayne Bondurant both had big days again, Scooby Wright played up to his hyped debut, and the defensive line depth became a thing to watch. Dwight Melvin, a redshirt freshman from Laveen, Ariz., and Kirifi Taula both played well for the second string defensive line.

There are playmakers in this group, and if anything, they're a year smarter and a year more in tune with Jeff Casteel's system.

Arizona vs. UNLV preview: The Wildcats' romp of the Rebels is on