The Arizona Wildcats running back is entering the 2013 NFL Draft.

Share All sharing options for: Ka'Deem Carey is entering the 2014 NFL Draft

#TeamKaDeem is no longer the Arizona Wildcats.

Running back Ka'Deem Carey committed to enter the 2014 NFL Draft on Monday, per a university release. 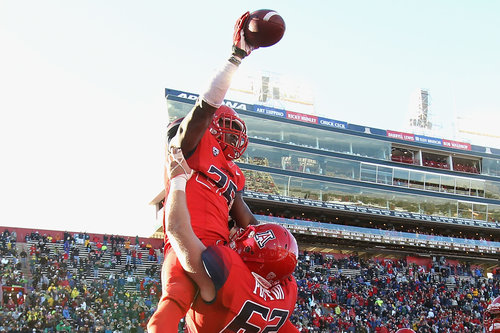 A look back at Ka'Deem Carey's time at Arizona

"I'm excited for the next phase of my career and to enter the NFL Draft," Carey said. "I want to thank God, my family, Coach Rodriguez, Coach Magee and all of my coaches for everything they've done for me. My time playing football for Arizona will always be very special to me and I want to thank the fans and the Tucson community for supporting me throughout my career. The future of Arizona football is bright. Bear Down."

Carey foregoes his senior season and enters the NFL Draft having received a second-round overall talent evaluation. However, a few teams pegged the Arizona back as a first-round talent, according to Yahoo! Sports' Rand Getlin. While Carey took a bit longer than expected to make his decision, one that apparently wasn't an automatic one following the AdvoCare V100 Bowl victory, the solid grade and few reasons to stay -- beyond sentimental ones -- made it an unsurprising choice.

Around the UA, they thought there was real chance Carey could come back. After talking w/people today, that feeling seems to have changed.

Carey leaves UA as the Pac-12's seventh all-time leading rusher with 4,239 yards on the ground. He set records for the Wildcats with 52 total touchdowns and all-purpose yards 5,483 all-purpose yards in three seasons.

Where does Carey stand in the draft?

ESPN ranks him as the 60th-best prospect and SB Nation's Dan Kadar has Carey at 57th. He stands among the best running backs in the draft -- NFL teams don't like to swing at backs in the first round all that often -- along with fellow underclassmen Tre Mason of Auburn, Lache Seastrunk of Baylor and Bishop Sankey out of Washington.