The NFL gave Ka'Deem Carey a second-round draft grade and it appears it is quite favorable to him leaving school.

The NFL Draft Advisory Board returned its draft grade to Arizona Wildcats running back Ka'Deem Carey, and the second-round projection has him leaning toward leaving school, according to Yahoo! reporter Rand Getlin. Some NFL teams even believe Carey has first-round potential.

After receiving a 2nd round grade from the NFL Draft Advisory Board, #Arizona RB Ka'Deem Carey is leaning toward entering the 2014 NFL Draft

Regarding #Arizona's Ka'Deem Carey, there are at least a few teams that believe he has first round potential.

Carey said in an ESPN interview just after the AdvoCare V100 Bowl that games with his college pals like the one he'd just finished will make it hard to leave, and he genuinely appeared to not know whether he'd do so. But with such a high grade, it seems like the smart choice to forgo his senior season. His name is in the record books, the Wildcats won two bowl games and won eight games in a sped-up rebuilding project behind him, and there's more risk with not much more reward in terms of his draft stock moving forward. 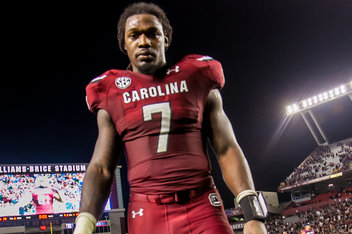 Mocking the Draft projects the best 100 prospects for the draft

Though Arizona would be outright dangerous next season with Carey and a greatly-improved receiving group, he has taken a pounding in two seasons as the full-time back. That could go a long way toward how NFL teams view him if he took another 300 or so attempts in 2014.

There haven't been any significant injuries despite all the carries, and that's sort of why Carey might be smart to leave now -- he doesn't want any signs show he could have too many miles on him before he makes a dime.

The second-round overall grade seems to align with what Dan Kadar of SB Nation projects. He currently has Carey at No. 57 in his top-100 for the 2014 NFL Draft.

Carey told the Arizona Daily Star three weeks ago that he would find a first-round or second-round grade "hard to pass up," so at this point, a decision to stay for another year under Rich Rodriguez would be a major surprise. Then again, it always seemed that this would be his final season in navy and cardinal.