It appears the Arizona Wildcats' patience with commit Naijiel Hale.

Update (11:11 a.m. MST, Saturday): Hale tweeted that he has committed to the Washington Huskies.

I would like to announce that I've decommitted from Arizona and officially a #Washington huskie. I… http://t.co/ApJ7RKqIsO

Rich Rodriguez and the Arizona football team "parted ways" with defensive back recruit Naijiel Hale, the Arizona Daily Star's Daniel Berk confirmed on Saturday. The news came as Hale, the son of the late rap artist Nate Dogg, visited the Washington Huskies less than a week before national signing day.

Justin Hopkins of 24/7 Sports was first to break the news on Friday.

Hale is the second significant loss in the defensive back recruiting class. The Wildcats earned a commitment from 5-star corner Jalen Tabor but a week later in early January flipped his commitment to Florida. Tabor was easily the biggest recruit to commit to Arizona in Rodriguez's tenure.

Seemingly, the Hale situation is a matter of philosophies. The Wildcats wants firm commitments, and Hale, a 3-star defensive back out of St. John Bosco High School in Bellflower, Calif., appeared to be wavering for some time. Apparently, the UA coaching staff wasn't so keen on Hale taking visits after committing.

The UA's philosophy the last couple years has been to be aggressive early, get commitments and both sides stay committed until signing day.

@BearDownBeards Lotsa factors including staff not being crazy about him taking visits after committing.

Few people have asked me if Arizona is in a position to do this. Absolutely. No player, anywhere, is bigger than the morals of a program

Now, it's not completely outlandish the Wildcats parted ways. Teams can obviously refuse the service of a player if they learn that the fit isn't going to work. But without fleshing out the specifics of what Berk and Scout's Jason Scheer know, it's a bit odd if the Wildcats' attention toward commits wanes after going so hard at them early on. Everyone knows it's not a done deal until National Signing Day ends in faxed signatures -- kids want attention. 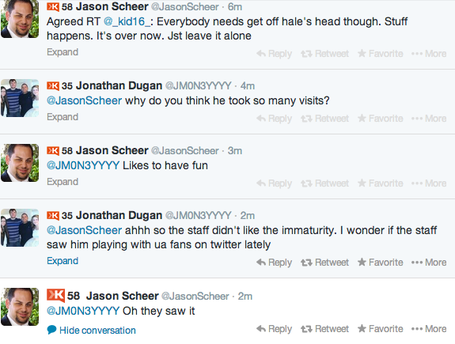 Hale still listed himself as an Arizona commit on his Twitter profile as of Saturday morning, and he got in some potential sub-tweets in as the news of UA going a different way became unofficially official.

Can't trust every face if you got a watch.

First-year UW coach Chris Petersen was in on Hale's recruitment while at Boise State, and Washington or even Utah could be a scary landing spots for Hale from the Arizona perspective.