During the last couple of open practices that the Arizona Wildcats have held, Anu Solomon was taking all of the first-team reps, giving the impression that the redshirt freshman may be the front-runner to lock down the starting job.

He, along with Jesse Scroggins seemed to have been separating themselves from the pack just a little bit. And that could be because of who the two remind Rich Rodriguez of.

"Every guy's a little bit different," Rodriguez said. "But it's almost like a combination of Matt (Scott) and B.J. (Denker) for both (Solomon and Scroggins). They're athletic enough to run, but they can throw the ball pretty well." 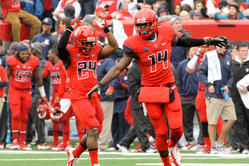 Looking at the pecking order during the most recent open practice

That mental aspect is what Anu Solomon thinks his biggest attribute is right now, exactly like how Denker thought of himself last year.

"What do I bring? Making the right decisions," Solomon said. "Making something out of nothing."

Solomon was very open about his lack of speed, and how his long-distance speed may be his biggest weakness as fall camp continues on.

"Right now I'm not moving that fast. I'm eating a lot because that's what summer camp does to you but I'll be good. We take long drives and I'm huffing and puffing sometimes, but I just gotta suck it up and get in good shape."

So how does Anu Solomon improve upon his speed?

"You know, just coming out here after practice and going to the weight room and working with the strength coaches. Running long distance, trying to get that speed up, and working on my endurance."

Another thing he feels that is giving him trouble right now is arm strength, but what quarterback out there is ever fully satisfied with their arm strength?

"I'm also working on the zip on my balls, and I just gotta eliminate the rookie, silly mistakes."

One big thing working in Anu's favor, and really all four quarterbacks' favor, is the experience on the offensive line this year. Those guys are able to make the job easier for whoever will be taking snaps from center.

And another thing working in favor of all the quarterbacks? This receiving corps.

"It's getting better every day," Solomon said of the chemistry he has with those guys. "It's a talented crew, outside and inside, so typically there are certain reads I have to go outside or inside, but since I have a talented corps, I can go wherever I want."

Even in the midst of the competition, all of the quarterbacks are still out there helping each other get better, both on the field and in the film room.

"Especially in the film room we correct each other," said Solomon. "When I make a bad play, every body in the quarterback room, not just (QB coach Rod) Smith, but all the other quarterbacks that I'm competing against, they're telling me I gotta read this because there are certain things that they see that I can't see. And what I miss, they correct me on, and it's a good thing to have."