This is the most-hyped group heading into this season, which will likely give Arizona a fresh-looking offense

Last year, the passing game struggled, and that can be partially placed on the young group of receivers. But that entire group of playmakers now has an entire season under their belt, and Austin Hill is back from injury, along with a couple of super-talented transfers.

That's a lot of names and a lot of depth in an offense where having depth at receiver will put amounts of pressure on opposing secondaries that has never been seen before at Arizona.

The big story coming into this year is how will Austin Hill respond to missing an entire season due to knee surgery? Although it's been well over a year since the injury, Hill does seem to be lacking confidence in that knee during camp, and Rich Rodriguez has mentioned several times that they're limiting his snaps in practice. He may have been one of the best receivers in the Pac-12 in 2012, but will he even be the best receiver on his own team this season? 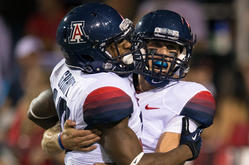 How Samajie Grant's upbringing shaped him as a football player

Nate Phillips came out of nowhere to lead the team in all the major receiving categories last year as a freshman. Since then, he missed almost all of Spring ball with an injury, and is now currently dealing with a little something in his foot. At 5-7, he's tied for the shortest player on the team, but he's shown that his lack of height doesn't effect him very much.

At the end of last season, the story was the emergence of Trey Griffey. The son of MLB legend Ken Griffey Jr. did not even record a catch in the first nine games of the season, but then caught four balls against Washington State, three against Oregon, four against ASU, and then three in the bowl game against Boston College including his only two touchdown receptions of his career. Look for him to build off that momentum from the end of last year and have a consistently productive year this time around.

And now we finally get to the transfers Cayleb Jones and DaVonte' Neal. Jones (Texas) and Neal (Notre Dame) both sat out last year, but are extra motivated to contribute this season.

Cayleb Jones left Texas amid some tumultuous circumstances, but its' obvious he's chomping at the bit to prove himself worthy.

"I've been looking forward to (the first game) since I left Texas," Jones said. "For me, it's coming here on a second opportunity and being able to just take advantage of it. Be able to give Coach Rod everything that he's given to me. Just be able to give back, just play well, and see how it goes."

He's looked like the most athletically gifted player out there during practice, so a big year from him could be in the works. Not to be overlooked is DaVonte' Neal, but it seems like he'll be most dangerous in sweep plays, and in the kick return game. Another speedster is freshman Tyrell Johnson. Johnson's been having problems catching the ball, but he could be ultra-dangerous on those sweep plays and on kick returns.

And then there's the case of the tight ends. Josh Kern is still relatively new at the position, while Trevor Wood comes in as a freshman from Chaparral looking to get significant playing time in his first year. Wood is a much larger presence physically, and Kern has been a little banged up lately, so look for the freshman to make his mark in the middle of the field.

More: Get to know Josh Kern in '11 Questions'

These receivers are so good and so deep that not only will they be running routes, but they will be running the ball out of the backfield, and playing defense.

"Whether it's DaVonte' or Samajie or Cayleb. Some of those guys that could play in the secondary on our SWAT team, we will start doing that," coach Rodriguez said. "You gotta teach 'em up, coach 'em up a little bit. We've never had the ability to do that but I think with them, those guys will get a chance."

All of this is all well and good, but how to make all these pieces fit.

An "unselfish attitude and mindset" is what's needed according to Cayleb Jones. Everyone seems to be all in on this unselfish attitude. Look for it to pay off with lots of catches for lots of guys.