The starting five is rock solid, but after that, who knows?

The biggest advantage that the Arizona Wildcats offense has in 2014 is the sheer experience on the starting offensive line. No team in the Pac-12 South returns as much game experience as the Wildcats, and only Washington has more experience in the conference.

And it's good experience. Ka'Deem Carey is good, but not good enough to do what he did the last two years all by himself. He had the vast majority of these guys leading the way for those carries.

But behind the starting five? That might be a problem.

Assuming last year's line is essentially the same as this year's with the exception of Chris Putton, here's how the lay of the land will go:

Coach Rodriguez said that he has been looking for an eight-man rotation (starting five + backups at center, guard and tackle), but as of last Saturday's practice, he didn't feel like the depth satisfied that desire. 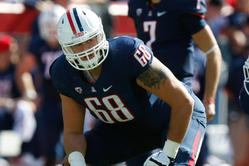 "I think we're getting close to having six or seven," coach said. "But I'm not sure we're at eight right now, and it might be a freshman or two in that eight. So our depth is not what it needs to be, so we're still going to have to keep our fingers crossed and stay healthy."

The freshmen that seem to have the best chance of playing right now are Layth Friekh and Jacob Alsadek. Levi Walton is definitely in that discussion as well. I would think that RichRod would want to avoid Friekh and Walton if at all possible so that they wouldn't be thrown out there as true freshmen, but if their play in practice is at the level that has been rumored, then there's no reason to keep them on the sideline if they're capable.

The best back story on any of the offensive line guys is Gerhard de Beer. de Beer is from South Africa, and came to Arizona on a track and field scholarship. He redshirted last season for football, because as Rodriguez likes to say, he didn't even know how to put his pads on, let alone play football.

While de Beer may not see a huge role this year, Rodriguez said on Monday that there's definitely a future there for him. "He's still learning and he's juggling two sports so it hasn't been the easiest thing for him. He's a big, athletic guy and I think he has a future in football. I can see him working into a football scholarship the way he is progressing. He's definitely an offensive tackle, and I think he can be a good one."

But as far as the current starters on the offensive line go, it's all about staying healthy. If the main group of five stay healthy, there should be no real concerns. After all, this is an offensive line that plowed the way to two-straight 1,800+ yard seasons for Ka'Deem Carey.