Arizona hockey: Wildcats take down No. 11 Central Oklahoma behind star-power

Share All sharing options for: Arizona hockey: Wildcats take down No. 11 Central Oklahoma behind star-power

In a low-scoring game with not a lot of scoring chances, the No. 16 Arizona Wildcats won their second-straight game over a ranked WCHL opponent, this time against No. 11 Central Oklahoma.

This was the first time Arizona had beaten Central Oklahoma in quite a while.

"We haven't beat Central Oklahoma since I've been here and I'm a senior," said Andrew Murmes.  "Definitely feels good getting those two wins.  Winning games and seeing the guys come together is huge."

"This is a good win for us," added head coach Sean Hogan.

While Arizona definitely showed some improved pressure from the defense, there were some times when both Oklahoma and UCO were able to breakthrough to the goalie to get some open looks.  But the Wildcat netminders have been up to the challenge. 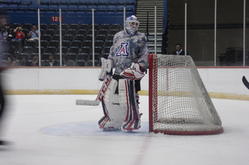 Arizona defeated the Oklahoma Sooners in all three matchups this season.

Garrett Patrick started in net Friday after Steven Sisler played Thursday night against Oklahoma, which was the plan all along.  Patrick stopped 40 of the 41 UCO shots on the night.

The Bronchos opened the scoring in the first when Riley Spraggs found the back of the net at 7:51 of the first period.  Three minutes later, the Wildcats had a chance, but the puck squirted just wide of the net, but drew a UCO penalty, which was basically the theme of the night.

That penalty led to a power play goal from Murmes to tie the game at one.  The goal was made possible thanks to great passing around the net from Brennen Parker and Ansel Ivens-Anderson.

Central Oklahoma took three more penalties right after the Murmes goal, giving Arizona a lengthy 5-on-3 advantage, but the Cats were not able to capitalize on it.  The same situation happened again in the third, and again, a 5-on-3 was wasted.

"We weren't getting a lot of shots," continued Hogan.  "We talked about it between periods.  We're overthinking it and looking for the perfect play."

"We just gotta make sure we capitalize on those chances tomorrow if we get them."

Five minutes into the second period, Central Oklahoma had a scoring chance, but rang one off the post, reminiscent of the closing minutes of Thursday night's game.  It led to a breakaway opportunity for Arizona, but Alex O'Dea was called for charging when he crashed hard into the goalie.

With seven minutes left in the period, UCO defenseman Trevor LeBlanc received a five minute major and a game misconduct for contact to the head, giving the Wildcats another power play.

Once again, Arizona took advantage of the Broncho penalty when Ivens-Anderson buried the puck two minutes into the man advantage, which turned out to be the game winner.  And again, great passing from Parker and Murmes from behind the net gave Ansel the puck right out front.

Before the third period began, UCO goalie Tory Caldwell fell down during warmups and took out his own net, which was quite hilarious.

Almost as embarrassing as this, but not quite:

The third period was very back-and-forth, with not many scoring chances from either side, and Arizona held on for the win.  O'Dea and Bryan Drazner were both injured in the period.  Drazner was receiving treatment for his lower left leg after the game.  O'Dea returned to game action after suffering what appeared to be a shoulder injury with seven minutes left in the game.

Arizona and Central Oklahoma face off again Saturday night at TCC.  The puck drops at 7:30, and you can catch all the game action online for free at arizonawildcathockey.org

"We're going to do the same thing, keep pinching hard with the D, try to capitalize on power plays more," said Hogan.

Two wins over highly-ranked WCHL foes is definitely a good way to get the second half rolling.

Arizona State lost their first game of the season Friday night when they lost to Oklahoma by a score of 3-1.  This is good for the Wildcats in many ways, mostly by the fact that they have already completed a season sweep of the Sooners.

"It's pretty cool," said coach Hogan.  "It helps us because it's a computer ranking and it shows that ASU isn't unbeatable."

"I was saying this morning that you can catch (ASU) if you get good goaltending, and you can match up talent-wise.  Oklahoma has a ton of talent, and they must have gotten some good goaltending.  Big win for them."