Arizona hockey: Wildcats look to keep rolling as they host No. 4 Liberty Flames

Share All sharing options for: Arizona hockey: Wildcats look to keep rolling as they host No. 4 Liberty Flames

The Arizona Wildcats host No. 4 Liberty this weekend in a rematch from a series earlier in the year which the two teams split.

Arizona moved up three spots in the ACHA rankings to number 13 thanks to wins over now No. 3 Oklahoma and No. 11 Central Oklahoma last weekend.

Here's a look at the new rankings, which feature a now one-loss ASU team in the top spot. 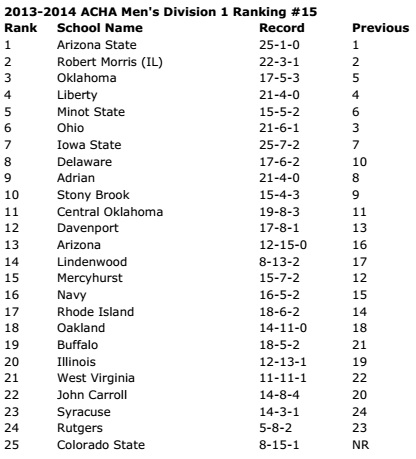 Even though Oklahoma went 1-2-0 last week, their victory over ASU was enough to push them up to the third spot.  Also entering the rankings is a fifth team from the WCHL in Colorado State.  Always good to have past and future opponents in the top 25.

Arizona jumps three spots thanks probably to OU's win in Tempe since the Cats finished the season series against the Sooners 3-0-0. 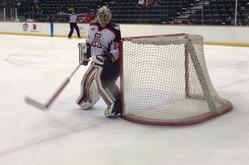 On the docket this week is No. 4 Liberty, who the Wildcats split a two-game series with back in October. Liberty will be heading to Tucson after falling to ASU on Thursday by a score of 3-2 in OT.  The Flames' only other losses this season have come to No. 10 Stony Brook (twice) and No. 12 Davenport.

Arizona has struggled in the second half of the season in recent years, but Andrew Murmes is hopeful that this team will not succumb to the same fate.

"We've had a track history where we haven't had good second halves," said Murmes.  "Winning games and seeing the guys come together is what's huge.  Builds chemistry and builds confidence, and that's what we need heading into the second half."

The season's been full of injuries for the Wildcats, and Murmes is no exception.  But the long break over the holidays has helped the team come back. 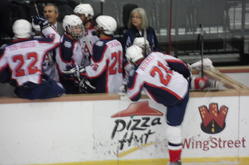 Andrew Murmes was key in Arizona's first win over UCO

"I had a great break," continued Murmes.  "I feel good.  Able to rest the body, relax, but still worked out and kept my body in shape."

Liberty is led by Lindsay LeBlanc, who is their top scorer with 36 points this season 13 G, 23 A).  The Flames also have a two-goalie thing going on just like Arizona, with Matt Pinel and Blair Bennett.  Bennett has the better numbers this year with a .920 save % and 2.42 GAA.  He played vs. ASU Thursday night, so expect to see Pinel start in goal Friday for Liberty, with Bennett taking Saturday.

The Flames are more balanced offensively than Arizona with seven guys picking up more than 20 points so far this season (Arizona has three).  Along with LeBlanc, Andrew McCombe, Jackson Kuhn, Ryley Egan and Charles Williams all have double-figures in goals scored this season.  Murmes (18), Brennen Parker (10), and Robbie Wilkinson (11) are the only Wildcats that can claim that distinction.

For Arizona to succeed this weekend, its defense is going to have to play better than it did against the Oklahoma schools.  The Wildcats gave up a total of 124 shots on goal in the three games.  If that happens this weekend, Liberty will make Arizona pay.