Even with the drop in the rankings, Arizona is still in decent shape

The Arizona Wildcats fell from No. 13 to No. 15 in this week's ACHA rankings after a winless weekend vs. now No. 3 Liberty.

Here's how the rankings shake out after this past weekend: 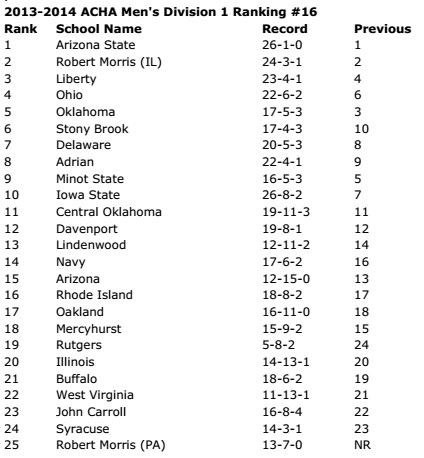 The No. 15 ranking is the highest Arizona has been this late in the season since the 2005-06 season.

The #15 ranking for the Wildcats is the highest Arizona has been ranked this late in the season since the 2005-2006 season!

Arizona has also played the country's toughest schedule so far this season, having played games against well over half of the teams that are ranked ahead of them. 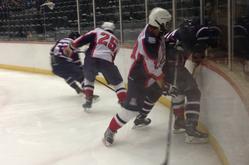 The Wildcats burned themselves against the Flames last weekend

Still, the Wildcats need to find a way to not head down the same path in the second half that this team has in previous years.  It seemed as though the Liberty series was the beginning of that yearly collapse.  Arizona took dumb penalties the entire weekend, and senior Andrew Murmes was disqualified in both games thanks to his ill-temper.

As of right now, the top 17 teams in the rankings will qualify for the 20-team ACHA National Tournament.  Big wins are needed here and now.

Arizona hosts Division II San Diego State this weekend at the TCC.  It's important to come out of these two games clean and with two easy victories, as the Wildcats head to Tempe to take on No. 1 ASU next weekend.