The ACHA rankings are getting important, so here's a look at this week's version

After a weekend where the Arizona Wildcats swept San Diego State by a combined score of 19-3, UA has moved up one spot in this week's ACHA rankings to 14th.

Here are the complete rankings: 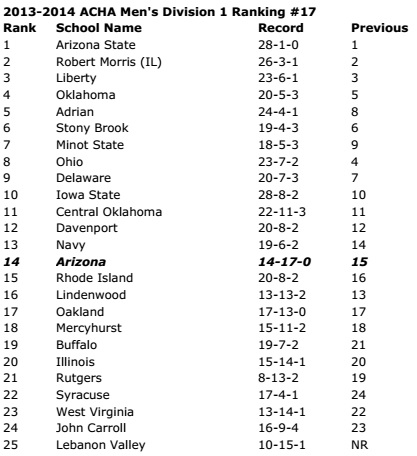 Lindenwood dropped three spots due to a 1-2-0 weekend against No. 12 Davenport and No. 5 Adrian.

Arizona's weekend against D2 SDSU was a productive one from the top line.  Ansel Ivens-Anderson, Brennen Parker and Rob Wilkinson all picked up a hat trick at some point during the weekend.  Ivens-Anderson had five total goals over the two games, while Parker had four.

The Wildcat offense was relentless on the Aztec goalies as they put 158 total shots on net during the two games.  That's ridiculous.

Arizona has a much tougher test this weekend as they head to Tempe to take on No. 1 ASU.  The Wildcats still have not beaten the Sun Devils since February 2009, so a win this week would be huge, both in the rankings and for morale purposes heading into the last few weeks of the year.  ASU spent last week at No. 3 Liberty, where they won both games by a combined 11-4, so they come in hot as well.

Not expecting any miracle wins this weekend against ASU, but some close games would be nice.