ACHA National Tournament: Arizona will play Illinois in first round

Arizona makes it into the national tournament this year!

Share All sharing options for: ACHA National Tournament: Arizona will play Illinois in first round

On Monday, Arizona found out its fate for the ACHA National Tournament, and it's a much better result than last year.

The Wildcats will take on Illinois in the first round.

Arizona enters as the 15 seed, while Illinois is the 18 seed.  The tournament starts March 6th, and is played in Newark, Delaware this season.  This is the first time Arizona will play in the ACHA National Tournament since the 2005-06 season.

The good news for Arizona is the possible second round match-up against the Oklahoma Sooners.  Arizona swept their WCHL foes in the regular season.  OU being the 2 seed means nothing if they have to face Arizona in their first game of the tourney.

Here's Arizona's half of the bracket before the Final Four: 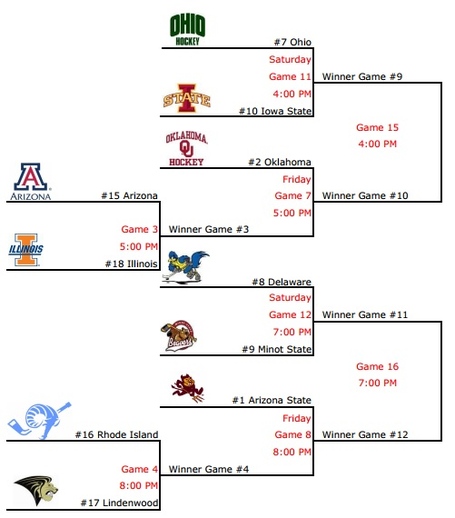 Once the tournament reaches the Final Four, the teams are re-seeded based on who's left, so if UA were to face ASU, it would either be in the National Semifinals or in the National Championship game.  How fun would that be to have both Arizona schools in the title game?

As the hosts of the reveal show said, this is one of the most inconsistent teams in the country.  The Cats could either win the whole thing, or lose the first game by ten goals.

First up, Arizona St. comes to Tucson for a two-game exhibition series Friday and Saturday night.  Both games start at 7:30 PM at TCC.